How To
/
Magicians
/
The craziest endurance stunts performed by David Blaine

David Blaine is a successful magician and endurance artist, known for breaking multiple world records and going through extreme endurance tests. Active since 1997, Blaine has completed over a dozen unbelievable stunts that took his body to the limits, and he is also credited for revolutionizing the way magic is shown on television. His first television special, Street Magic , impressed both journalists and audiences and he acquired television success not only through the difficulty of his stunts, but also by changing the perspective. Instead of having the camera focusing on the performer all the time, Blaine included frequent views of audience reactions. Let’s see what has determined New York Daily News to consider that “Blaine can lay claim to his own brand of wizardry. The magic he offers operates on an uncommonly personal level.”

The first extreme stunt performed by David Blaine dates from April 1999, when he spent seven days in an underground plastic box, located under a 3-ton water-filled tank. He could only communicate with the outside through a hand buzzer, and the magician did not eat or speak the entire time. Blaine survived with just 2 or 3 water spoons a say, and an emergency crew stood by in case anything went wrong. 75,000 people visited the site, including Houdini’s niece Marie Blood, who said that Blaine had outdone her uncle. Blaine’s declaration after he was rescued from the coffin was “I saw something very prophetic … a vision of every race, every religion, every age group banding together, and that made all this worthwhile.” 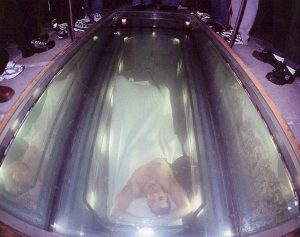 The next crazy endurance stunt was performed in November 2000, when Blaine spent two days in a large block of ice located in Times Square, New York City. A tube supplied him with water and air, and a tube took his urine out. After 63 hours, 42 minutes, and 15 seconds he was removed with chain saws and taken to the hospital immediately to prevent him from going into shock. It took Blaine a month to recover after this stunt.

In 2002 Blaine spent 35 hours on a high pillar just 22 inches wide in Bryant Park, New York City. He was not harnessed to the pillar, but had two retractable handles to grasp in case of powerful winds. At the end of the stunt, Blaine jumped down onto a landing platform made of cardboard boxes and suffered minor injuries. 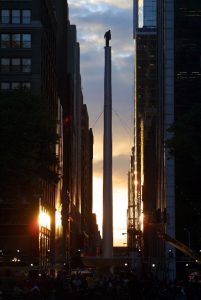 An extraordinary stunt followed in September 2003, when Blaine was sealed in a transparent Plexiglas case suspended 30 feet in the air next to London’s River Thames. A webcam was installed inside the box during the 44 day-long stunt, and throughout the time Blaine did not eat and drank 4.5 litters of water per day. Spectators threw food towards the box, and someone tried to tempt Blaine with a hamburger flown up by a remote-controlled helicopter. A man tried to cut the cable that supplied Blaine with water and was arrested. On October 19, Blaine ended the stunt and emerged saying “I love you all!” The magician lost 54 lbs or 25% of his body weight, and the most difficult part of the stunt was re-feeding him.

In 2006, Blaine performed a stunt called Drowned Alive, for which he spent seven days submerged in a water-filled sphere containing isotonic saline. The stunt took place in front of the Lincoln Center in New York City and when the performance ended, he was asked by researchers to be monitored in order to study the human body’s reactions to prolonged submersion. 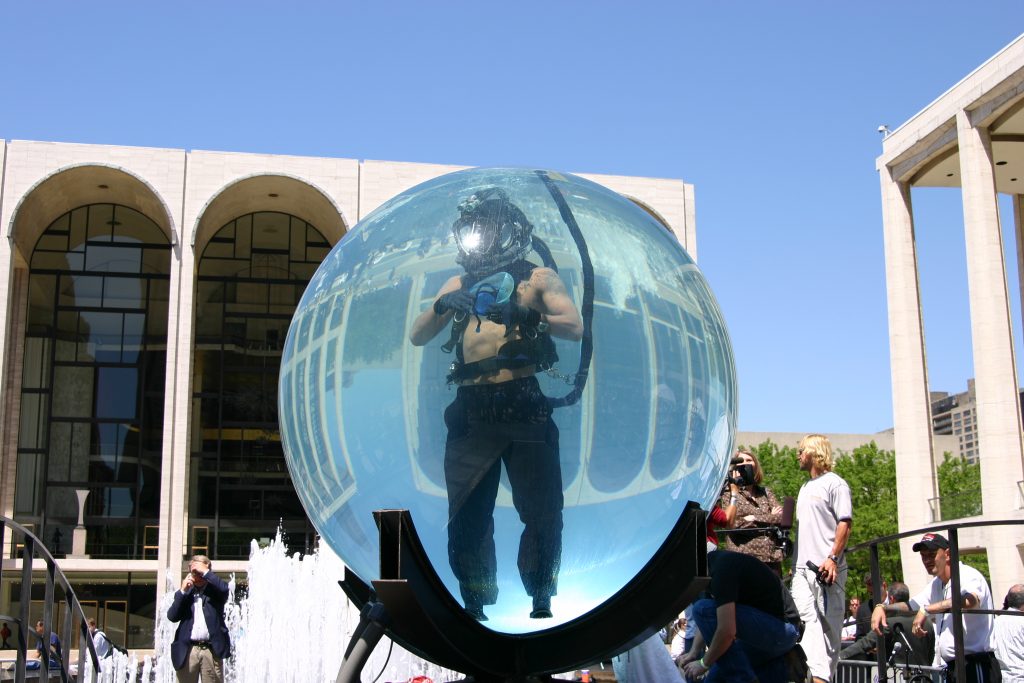 For his Revolution stunt, Blaine was shackled in a rotating gyroscope without food or water. The performer had intended to escape within 16 hours, but he managed to complete the stunt 52 hours later.

For this stunt from 2008, Blaine planned to spent 60 hours hung upside down, without a safety net. However, he came down once an hour for a medical check and to use the bathroom. 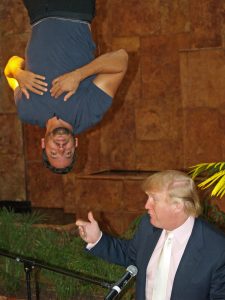 In 2010, Blaine released a television special in which he caught a .22 caliber bullet fired from a rifle with just a small metal cup he held in his mouth.

Electrified: One Million Volts Always On

In 2012, Blaine performed an endurance stunt for which he spent 72 hours on an electrified high pillar in New York City. The electric discharge around him was of one million volts or more continuously. He had to wear a special costume that prevented electrical current from travelling through the body and he did not eat or sleep throughout the stunt. The stunt was streamed live on YouTube and at the end, Blaine walked away without assistance just to go to hospital for a medical check.

In a television special aired on November 15, 2016 on ABC, Blaine repeated the previous stunt, and this time he improved the first version by catching the bullet live on stage in front of an audience of 20,000 people, while firing the gun himself. Later it was revealed to the public that David Blaine was actually hurt during this performance, as the cup slipped and the bullet shattered the mouth guard and cut his throat.
When it comes to endurance stunts, there is no one like David Blaine, who is taking magic and his own body to the limits. Actually there are no tricks behind his performances – Blaine likes to push the boundaries of the human body to see what we are capable of. The possibility of death in such dangerous situations attracts the public, as well as the idea of seeing something that has not been done before, from staying inside an ice block to standing on a tall pole. We are looking forward to seeing what endurance stunt David Blaine will perform next!